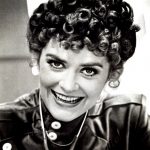 Mark your diaries! Doctor Who: Ace Adventures DVD Box Set [1987] - Amazon (Released May 7th) Finally to be released on DVD, your chance to own Patricia's Doctor Who episode 'Dragonfire'! 12th - 13th May 2012, Peterborough THE GREATEST SHOW IN THE GALAXY! A 2 day event for fans of sci-fi, cult film and TV: Patricia will be a guest alongside some very familiar faces at ... END_OF_DOCUMENT_TOKEN_TO_BE_REPLACED