The Rocky Horror Show: As I Remember It

There is some air of mystique surrounding the beginnings of Richard O’Brien’s cult masterpiece. Devoted fans – of which there are many – will know of course that the show began on a very small stage at the Royal Court Theatre in London’s Sloane Square. Quickly gathering momentum and becoming THE must-see show, it was soon transferred down the road to the Chelsea Classic’s larger premises. The celluloid version soon followed; the essential, low-budget B-movie parody which is synonymous with rock’n’roll, dressing up, glamorously ambiguous sexuality and generally letting your hair down and having a damn good time.

But there has always been a desire to know more, more, more about this magical period when none of these talented young actors had any clue that they were starting out on such an extraordinary journey. Crystal clear memories of those very early days seem to have been somewhat lost under a veil of glitter and fishnets – until now.

Rayner Bourton’s ‘The Rocky Horror Show: As I Remember It’ is a treasure trove of comprehensive and absorbing recollections of his experiences as the original Rocky. Full of amusing anecdotes and endearing first impressions of his fellow cast members, Rayner takes the reader on a fascinating journey which bounces along at a sprightly pace and makes for very pleasing reading.

Rayner’s writing is refreshing and honest; his memories of being a handsome young man in a very swinging London and his numerous conquests are particularly engaging! He writes elegantly, and shows respect and genuine affection for his fellow cast members – in particular Patricia Quinn who is mentioned throughout. This book will please Rocky Horror fans old and new – the sheer excitement of that nirvana-like opening night in 1973 is tangible and the now infamous ‘glitter incident’ is described with eye-watering, startling clarity.

But there is more to this tale than Rocky. Rayner eloquently conveys his experience of city life during the Seventies; the people, parties, places and attitudes. Clearly he does not need to write solely about Rocky to capture the reader’s interest and the emphasis is always on how much fun was had throughout the period. This is an immensely enjoyable book which is beyond any doubt, required reading for all fans of Rocky Horror. 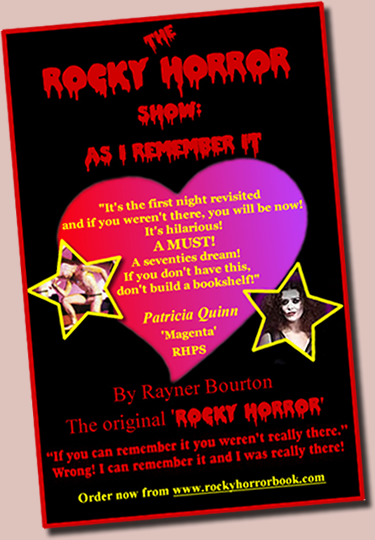