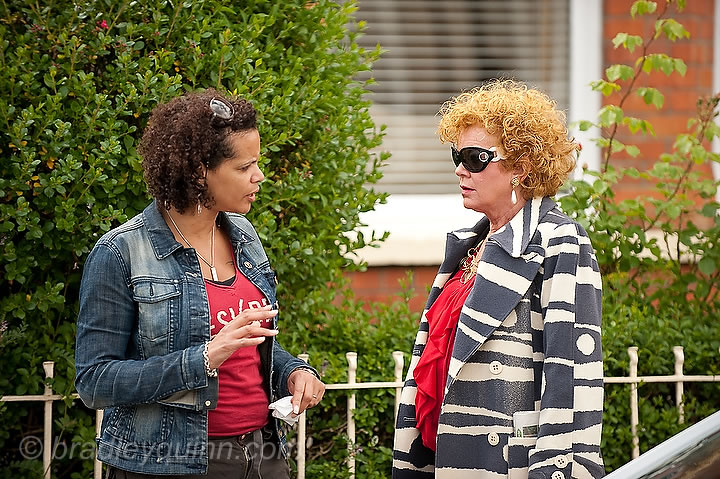 Rocky Horror actress, the wonderfully gregarious Patricia Quinn (aunt of Snow Patrol drummer, Johnny Quinn) is the star of Your Number’s Up, a touching and darkly comic short film written and directed by Jonson D’Angelo, who is originally from the Falls Road in Belfast but, like Quinn, left as a teenager for London. D’Angelo’s mum is from Belfast and her father was black American; she has a daughter with the late Pete de Freitas, drummer with Echo and the Bunnymen. Shot on location last year, Your Number’s Up, produced by Karlene Page of Big Hug Limited and backed by the award-winning Trevor Beattie (Moon) –who instantly loved the script – premieres this Saturday as part of the Belfast Film Festival. It follows the loud, gaudy, eccentric, Bingo-loving Bernie from the Falls Road, as she whiles away her days since her husband’s death scouring the local paper and deciding which wake to gatecrash next. I meet D’Angelo and Quinn at a Soho Hotel to talk about their intriguing new film, and it’s clear they are fond of each other. The director certainly matches the actress for enthusiasm, and our conversation is punctuated with laughs a plenty as Quinn regales us with hilarious anecdotes, jumping from the broad Belfast accent she uses in the film to her own, ‘posh’ brogue (Quinn’s words)…

Irish World (IW): JONSON, HOW LONG HAVE YOU BEEN MAKING FILMS?

Well I’ve been making commercials for the music industry for 15 years, and moved into film around four years ago with Your Number’s Up. I went to the NI Film Commission for funding, but as much as they like the film they said it was too long as a short film. I couldn’t, it needs to be length it is. So I went off to make another little short, with one of Pat’s mates, Richard O’Brien as narrator, and then Karlene Page decided to finance Your Number’s Up and I got onto Pat. Let’s go to Belfast, girl!

IW: HOW DID YOU TWO MEET?

PAT: My ex-husband Don Hawkins and Jonson used to work together, and he read the script and said, ‘Ooh, my ex-wife Pat could play this!’ I’ve played Transylvanians, Southern Irish, Lady Macbeth; everything in the world but a Belfast woman, the place where I’m from. And I’m quite posh too, nobody believes I’m from Belfast…

JONSON: I had a really strong accent when I arrived in London, but I had to lose it immediately – people couldn’t understand me. And they couldn’t understand how I was black and had an Irish accent, it messed with their heads! So anyway, Pat got the script, I came over to speak to her about it and she answered me in character, with this really broad Belfast accent. She was her!

IW: WHO IS BERNIE BASED ON?

JONSON: She’s based on my mother’s friend Annie; the two of them are a great team (the film is dedicated to them). She’s not well now, she’s got Parkinson’s disease, but when she was on form she was one of the loudest, funniest characters I’ve ever met. I’d just laugh at her; she’d literally look at the papers and go, “Right, who’s dead the day?” Now she didn’t go to wakes of people that she didn’t know like Bernie does, but because she knew everybody, she was always going to wakes! The whole thing evolved from there. And the Bingo; when she wasn’t able to go out much, she started going to Bingo at the community hall. Not once a week; I mean religiously, every night. So I tied the two together. But Pat was her. If she had a gold tooth, she would be Annie.

PAT: Oh I draw the line at getting a gold tooth put in. But the gold chain necklace, the garish frilly red top, the cow design coat, they totally made her. They totally fitted the character – or maybe I made the character fit me!

IW: HOW DID YOU GET A FEEL FOR THE PART?

PAT: I didn’t know until I hit the streets of Belfast. Jonson seems to know everyone in Belfast, it’s incredible. But we were this big crowd filming at a community centre, and the film team hadn’t told the police we‘d be shooting anything here, so the helicopters kept circling non-stop, to the point that we couldn’t film with all the noise!

JONSON: Yeah, we ended up keeping the sound of the helicopters in; you can hear them quite loudly at one point.

PAT: We were filming at one point at the top of the Divis Flats, and I’d never been there. I left Belfast at seventeen, before the Troubles began; I didn’t live through any of it. It was amazing to go back, to be in this film and go to certain areas. I’d never seen the murals, for instance. When I went back home, I just went to Robinson & Cleavers, darling… I was in shock – I kept thinking, where did I live?!

IW: YOUR FILM, THE OUTSIDER, WAS SET THEN, WASN’T IT?

I did that in the 80s. Yes, it was very controversial. It’s about a Vietnam soldier from Detroit being encouraged by his grandpapa, an IRA sympathiser, about the wonders of Ireland. He comes to Belfast to support the IRA. It was shot in Dublin because it was all happening up North. It was very funny; there was a little boy brought down from Belfast for the film, and the props men were making petrol bombs, and the wee fella said, “I’m sorry, mister but you’re not making that right!” I think it would be interesting when we show Your Number’s Up at the Belfast Film Festival to talk about my ‘war-time’ film and my ‘peace-time’ film.

IW: THE MURALS, PEACE WALL ET AL ARE JUST INCIDENTAL TO THE STORY, AREN’T THEY?

JONSON: When I wrote the script, in my head it was set in the early 80s, and when I did my initial recce two years before we shot the film, I was quite surprised at how little had changed. So it’s set in the present day. During those two years, I would speak to my uncle about how I wanted to film on the Falls Road, with all the murals in the background and he’d say, ‘You’d better hurry up!’ The talk is they are going to paint them all over. So we rushed it to film before anything could change. In a way our little film could be capturing a moment in history.

PAT: They are, and of course they should take down the murals and the barricades. They’re not a statue in Trafalgar Square, you know? If they don’t get rid of them, we’ll go round at night and spray over them!

JONSON: There’s a scene in which Pat’s character goes through a turnstile which separates one ‘side’ from the other. It’s funny, because when we filmed there, I would not go through it. I grew up to believe you never went to the other side of the gate. I was actually scared; it’s crazy! But it’s still there, and they close it at night, even today. I didn’t have to recreate much stuff, it’s all still there.

PAT: She made me go through it, though!

IW: THE TWO SILENT GIRLS [DRESSED IDENTICALLY AT A WAKE] ARE BRILLIANT…

PAT: Oh yes, I call that bit The Shining, you remember those twins?!

JONSON: Haha! They were originally two old men in the script, but we couldn’t find two men who looked similar enough. It’s a nice touch.

IW: THE HUMOUR IS SO BELFAST…

PAT: And it seems to travel well too. I have a few English friends who have watched Your Number’s Up and been in tears of laughter. Some have expressed credulity that a wee Belfast woman would visit wakes for a living, but such women exist. Her husband has died, she’s a bit lonely and she enjoys a day out – it’s no more complicated than that. She’s a great mixture of comedy and pathos. People have said they can see her and her escapades becoming a half-hour series; because there’s nothing quite like it.

IW: WHAT’S NEXT FOR YOU BOTH?

JONSON: I’m currently writing the treatment for a full-length feature film, again set in Belfast. It’s about a hood, a young boy who grows up in a very rough area, a real bad-boy turned good. I was meant to be travelling to Beverly Hills the other day, as another of my shorts ‘Jenny’ is showing in the Beverley Hills Film Festival, but like a lot of people my plane’s not going anywhere! It’s about a girl with a shopping addiction, and stars Peter O’Toole’s son Lorcan. And of course, I’m off to Belfast soon. I hope so, anyway…

PAT: I might be off to play a vampire in a new movie in Goa. Either that, or I’ve been offered a role in a stage adaptation of The Decline And Fall of Evelyn Waugh. I love the vampire part, though. They offered it to Hammer Horror’s Ingrid Pitt, but she is of a ‘certain age’ now and not quite ready to draw blood in India. So they’ve come to me, which is hilarious. Another thing I’ve been asked to do is a Dragon Con – the biggest science fiction convention in the States in Atlanta, Georgia.

PAT: Really? I’ll have to take you with me then, it’s fate…